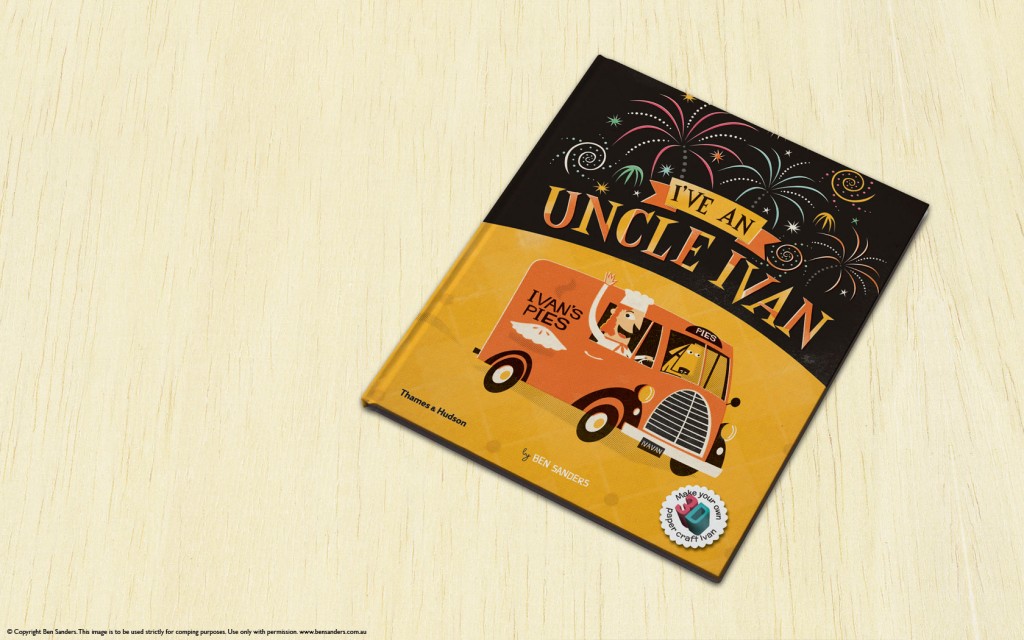 If you are in Melbourne this weekend, there’s a book launch not to be missed. Friend and colleague, Ben Sanders, is launching his first picture book! Ben is a graphic designer and illustrator of serious repute. His work regularly appears in mags, newspapers, books and advertising. You’ve probably seen his cool design work without even knowing. But, after reading “I’ve an Uncle Ivan” with your kids – you’re sure to recognise his work in the future.

“I’ve an Uncle Ivan” is a free-wheeling rhyme illustrated in a nostalgic 1950s style that introduces readers to Uncle Ivan, his extended family and 14 different modes of transport. Ivan has a niece on skates, who has two hitchhiking brothers. They have a cousin on a scooter, whose sister drives a Mini… And so it goes until we meet the whole family, who are travelling to a secret destination on every form of transport from unicycles to bi-planes to trams!

And yes, Ben really does have an Uncle called Ivan.

I love the endpapers in this cool, quirky book. There’s even a 3D model that kids can pop out, colour, and build so that they can retell the story and interact with the characters. Check it out!

The launch this Saturday is bound to be a hoot. Expect lemonade and fairy bread, balloon artist, activities and more. If you get along to it, tell Ben (and his wife and kids) I said hi…

One thought on “I've an Uncle Ivan”